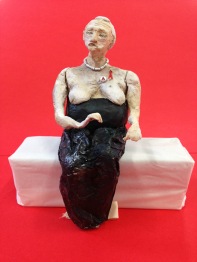 This project ranks amongst my favourite so far and was presented as my MA final project in 2014.

The project consisted in the conservation of three plasticene and paper figurines from the Central Saint Martins Museum and Study Collection. Created in 2007 by Garance Marneur, theatre and film designer, while she was a student at Saint Martins, the figurines were produced as costume renderings for an adaptation of Puccini’s opera Suor Angelica – part of a triptych of one act operas along with Il Tabarro and Gianni Schicchi, performed for the first time in 1918.

The figurines being intended as models for costume designs rather than museum objects was an aspect of prime importance as raising the ethical issues of intentionality and respect for the historicity of an object. The intentionality of the artist can here explain the poor condition the figurines were in only seven years after conception ; the quality of materials used is indeed of secondary importance when one does not have longevity in mind. More widely, the project presented interesting issues regarding the conservation of contemporary art and its use of materials prone to degrade. The aim here has thus been to find a balance between respecting the integrity of the works, and more interventive approaches to address the figurines’ structural deteriorations.

After much messy playing with plasticine, much pretending to be Hans Bellmer AND much researching and testing (OBVIOUSLY), the best course of action was mapped out. After mechanical cleaning the cracks and losses in the plasticine were coated with a solution of Paraloid B-72 10% (recommended concentration for use as a consolidant) in acetone (w/v). This serves as an isolating layer, to avoid contact between original and infilling materials and ensure the reversibility of the repairs, as well as a light adhesive to secure the infills. The cracks and losses were then infilled with DAS modelling clay, chosen for its malleability, good aging properties (samples were artificially aged) and cellulose fibres content. Being visually disruptive, the white repairs were subsequently in-painted using powdered CarbOthello pastel pencils. The newly painted areas have been kept slightly lighter than the original tones to blend in pleasingly while being clearly discernable as later additions. Finally, the tears in the figurines’ paper garments were repaired using Gampi Japanese tissue (hand painted with acrylic paints). To match the texture and appearance of the original paper as closely as possible the repairs were given a thin coating of Paraloid B-72 solution for more rigidity and shine. To conclude the project I created a display stand for each figurine using perspex as well as a new – and permanent – housing solution, constructing tailor-made boxes using archival materials. 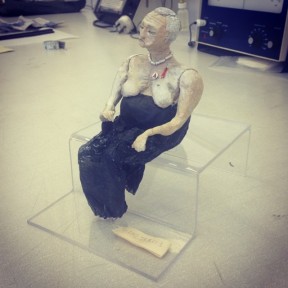 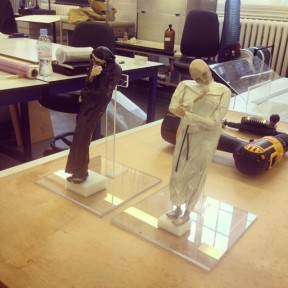 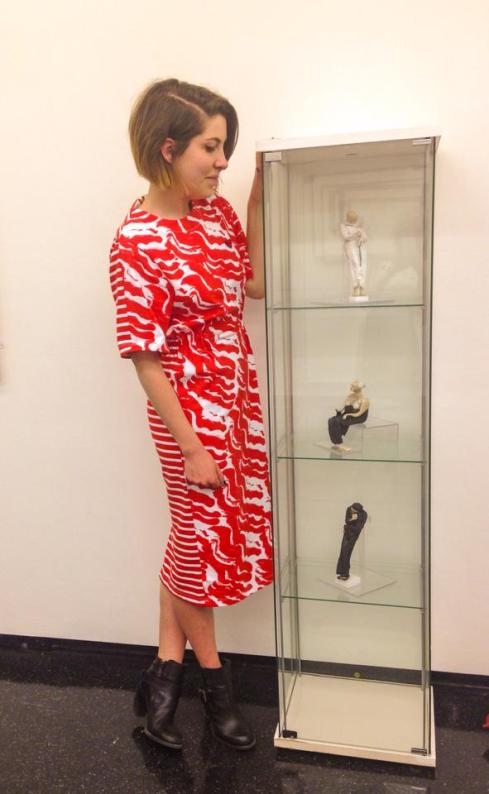 figurines being exhibited and yours truly (happy with herself)